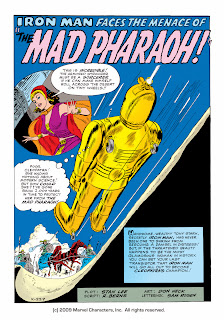 In 1963, the world was Cleopatra and Ancient Egyptian mad. This was not because of some crazy dance move that reminded folks of Egyptians walking. No, it is was because the King and Queen of Hollywood, Richard Burton and Elizabeth Taylor, were preparing to star as history’s most famous lovers in what would turn out to be one of the most expensive flops in history. That ill fated movie was Cleopatra and this film would spur an obsession with all things Coptic. This obsession even trickled its way into the Marvel universe.

When I first saw the title page of the Iron Man story in Tales of Suspense #44 I nearly tossed the article away and moved on to, surely, what would be a more fulfilling story. Alas my conscience got the better of me. I felt like I was violating some impossible code I had sworn to myself so I resigned to my sofa to plunge in. As the first few panels careened by I was enjoying the charm of the story. Tony is whisked away to the sandy dunes of Egypt to join in on an archaeological dig a where he finds that things are really tough to see through a stone wall. Never fear, Iron Man happens to be on vacation in the Sahara so he stops by to use his laser cutters to get through the four thousand year old wall. Yes, this story once cost 12 cents.

With every passing issue the facade of Tony and Iron Man is getting weaker and weaker. Even the editors are beginning to notice as there is one of the worst examples of strained dialogue occurs when Tony attempts to explain why Iron Man happens to be on the dark continent. There is certainly some meta humour here. I hope. It is reminiscent of the strained excuses Torch cooked up to his friends which were later proven to be futile. We are nearing the breaking point I can feel it.

Sadly these charming little quirks are the best part of the story. On page 5, Tony is waving goodbye to his doctor friend when suddenly Hatap appears and drags him back in time. This happens out of nowhere and I had to reread it many times because the switch is so abrupt that I thought a panel was missing. Anyway,Tony gets sucked back in time to Ptolemaic Egypt to help Hatap defeat the siren of the Nile. This is where things get really confusing.

History teaches us that Cleopatra and Marcus Antonius staged an outright revolution against the ruling Caesar Augustus which caused them to be besieged by the Roman forces. This revolution culminated in the sea battle of Actium and the deaths of the couple. In Iron Man’s history however the Romans seem to be besieging Cleopatra in her palace.  This never occurred. She was involved in a civil war with her brother but this was aided by the Romans under the command of Julius Caesar and she was only a young girl. She’s a full grown woman here. Its almost as if the writers (Stan Lee again) had not the most basic knowledge of one of the most well known stories in history. This invented history frustrated me to no end because when Iron Man ultimately weighs the battle in her favor it happens in a situation that never occurred. Yes, I accept that this is fantasy, I mean time travel and all, but it frustrates me because it is so far from history. There was a great possibility here of a fantastic time travel yarn that could have far reaching effects on the future Marvel universe but it turns out to be a weak, pointless, unintelligible story.

Stan should have gone to the theatres to see how he got an extremely well known story way off. Cleopatra would have sold one more badly needed ticket. What a wasted issue. 1 out of 5.