The Authenticity of Spider-Man

It says a lot that back in Amazing Fantasy, when Peter Parker made his debut, the first thing he decided to use his new found powers for was as a professional wrestler. Since then every one of his later issues were match-ups: Spider-Man. Vs. The Vulture, Spider-Man Vs. Doctor Octopus, Spider-Man Vs. Invaders from outer space.  Spider-Man’s villains up to this point concoct no complex or unintelligible plot to bring down the young superhero, they merely challenge him and a great match ensues. These characters face off in the arena of New York and it is fantastic.

Ding Ding! Round 4! Spider-Man Vs. Sandman. 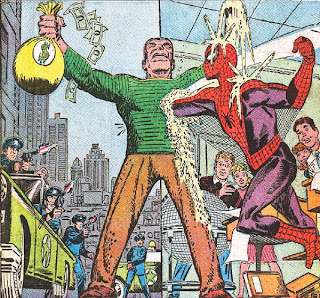 Flint Marko makes his first sandy appearance in this one and he catches Pete in the middle of a teenage quandary.  As we have learned up to this point in Spidey’s very short career, Pete’s success at defeating his nemeses is directly proportional to how much turmoil is going on in his teenage life. At this point, Pete is up to webbing in teenage turmoil. He has a date with calmly Liz who seems to be head of the cheerleading squad or some A crowd. In classic Flash Thompson cruel fashion she’s doing it out of charity. Pete doesn’t notice for he’s obsessed by how he can defeat the vastly more powerful Sandman and forgets his once in a lifetime chance with the Queen Bee. This is what I and no doubt the countless fans in this period love about The Amazing Spiderman. He is the one character that truly embodies the Silver Age Marvel mandate to bring reality to the Superhero comic. Whether its Pete’s inability to resew his costume after Sandman rips his mask or his preemptively hasty and therefore illegal take down of some suspicious characters outside of a jewelry store, everything about this issue feels authentic and realistic.

This issue isn’t all roses. The failures all generally lie in the two antagonists. Sandman’s origin story of escaping a prison and then getting exposed to a radioactive test is a tad wild and out of step with the rest of the mythology being created. The two other villains presented up to this point in the comics, came from a place of heightened reality, Vulture was a skilled robber who used gliding technology to enhance his abilities and Dr. Octopus was born out of science gone too far. Spidey’s origin story is similar. Sandman’s on the other hand results from happenstance and the evils of weaponization. It makes much more sense in the mythology of Hulk. It also is essentially the same origin story of the Hulk of this period. Something about Flint Marko seems lazy but this laziness does not hamper the progression of the story and this issue remains a wildly entertaining ride.

The other antagonist, J. Jonah Jameson, continues his absurd vendetta against Spider-Man. He even believes that Sandman and Spider-Man maybe the same man. Why doesn’t New York realize that J. Jonah Jameson is bat shit crazy?

Looking at this issue as a whole it is very much in a different league then the other work of this period. It is human, fresh and wildly entertaining. Not even the much more established Fantastic Four can compete with Spider-Man. No wonder these issues flew off the shelf. Looking at this issue in competition with only Spider-Man it is somewhere in the middle. It has great moments of charm but it is rather simplistic in plot and characterization. The art is also as detailed as Silver Age comics get. 3 1/2 out of 5.  Had the character of Sandman been more explored, it would have received a higher score.
Posted by Unknown at 20:01