Sloppy Story Telling: A Review of Journey Into Mystery #95

Story I Read: The Mighty Thor "The Demon Duplicators" (Journey Into Mystery#95 Aug 1963) 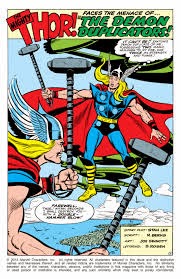 The astounding thing I have discovered as I journey through the Silver Age Marvel comics is the bipolar nature of the quality of these stories. Those of you who read my last review of Tales of Suspense know that that story was wildly terrible because of it’s disregard for furthering the development of Tony Stark. This story of Thor follows that model.

In a former article about Thor I noted his similarities to DC’s Superman. One of the major issues with that Kryptonian has always been his power and the fact that the balance between him and his villains is often tipped extraordinarily in his favour. This is because of his vast powers and the villain’s mortality. Thor suffers the same issue.  Contemporary comics heroes, like Iron Man and Spider-man, often fight mortals who use their own ingenuity. Thor on the other hand needs a threat that is equal to his abilities, which are supernatural, meaning he needs an equally supernatural threat. Of course, this need is amply balanced by Loki, but his adopted brother cannot always be the antagonist. We can all agree it would get boring.

Stan Lee in this story answers this conundrum by creating a great villain who is Thor himself. Well, not Thor himself but an equal evil duplicate. This I have no problem with. I find it interesting as it opens: up the question how do you defeat your exact equal? A fascinating and frightening idea. The problem I have with this story is how the duplicate comes about.

I understand in this early period of the Marvel Universe it was still unclear to the creatives if they wanted to establish a world in which all the hero’s share or individual worlds following their own streams. It therefore makes sense that canonicity in geographic location and macrocosmic influence are uncertain. However canonicity of character should at least be adhered to. It has been established in many former Thor stories that Dr. Don Blake (Thor’s absurd and unclear alter-ego) is a mild mannered General Practitioner MD. In this story Stan Lee establishes him as an MD who also invented an android and is preparing to announce the invention of artificial intelligence. This comes out of left field. Since when did the good doctor have an interest in AI? Where did he get his knowledge of “advanced robotic engineering?” Most importantly why is he suddenly at the forefront of this field. This makes absolutely no sense and is purely something created just to explain the connection between Don and Zaxton. I am sure in the next Thor, none of this will ever be mentioned and Dr. Blake will go back to treating patients quietly.

This lack of thought is further shown in the reason for Thor’s presence at the demonstration. He’s only there to open a safe. I kid you not. He is a glorified stage hand.

Though the battle between Thor and his duplicate is thoroughly entertaining as most battles in Thor are, the narrative conveniences and disregard for canon really make one wonder why any of this happened in the first place.

There are some clear changes going in the conception of the god as well. Don only occupies 3 panels. The creatives are clearly tired of that human drama and create a convenient Asgardian weather trauma just to cameo them in for entertainment. The soap opera with Jane is also given the back seat treatment. Thor saves her in one panel out of nowhere however we are not given a back story nor the location of her entrapment. She’s an after thought. It is sloppiness like this that cheapens the really exciting moments. That’s what I can say of my Marvel experience thus far. Sloppy.

This story is 2 out of 5. An exciting story mired by the sloppiness in narrative and the inexplicable convenient malleability of the Dr. Don Blake character.